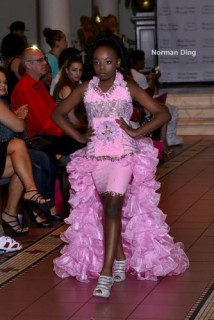 Founders and identical twins Jelissa Kelly and Jelana Moore were delighted to have Kayla-Marie and her sister Kelsey walk for them after seeing their walk at the audition.

"These girls have the look, poise, and determination of Unforgettable Divas," said Jelana Moore.

"I was extremely excited to participate in the Serenity nights show because the Unforgettable Divas line is different from anything I've ever worn before. Also, my little sister Kelsey made her modeling debut and she did an awesome job," said Kayla-Marie.

Kayla-Marie is a child model and has appeared in several fashion shows for Chi Chi Vogue. She also appeared in the Mini Miss Fashion Diva 2011 show. She is also interested in pursuing a career in acting.

Unforgettable Divas is a clothing line for girls. Their goal is to make every little girl look like an angel or princess.