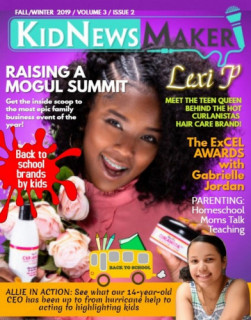 KidNewsMaker Fall 2019 Edition
Atlanta, Georgia, September 29, 2019 /KidZNewswire/ -- After an exciting summer tour spanning a few states, some incredible film projects and several recognitions, 14-year-old journalist Alejandra Stack will be releasing her award-winning KidNewsMaker publication in print in Fall 2019. The print edition has been requested by viewers who frequent the KidNewsMaker website which has hundreds of thousands of viewers from around the world. The site has individual stories shared over 2,000 times.
Allie had taken a break to focus on her acting, appearing in several projects such as ‘The Walking Dead’ and ‘Little’ and had a starring role in ‘Mixed Emotions’ as young Alicia opposite ‘In Living Color’ Fly Girl Jossie Harris Ross who played her mother in an Afro-Latino comedy. Allie is also the photo double to the character Abra in Stephen King’s ‘Dr. Sleep’ starring Ewan McGregor, the sequel to the cult classic ‘The Shining’.

“I really was about to quit because it got extremely hard and my mom sacrificed a lot to help me but we just couldn’t take it to the next level, then we got to a point where it seemed like no one was really that interested,” admitted Allie. “I even put up a post announcing I was done and she let me and said that we would just take a break. But right after that, so many people let us know that they were interested and began supporting us in our mission to get the print edition up and going again. And it was so incredible. So we talked about it, we learned a valuable lesson about not giving up, changed our business model and gave it one more go and it happened. We finally are where we need to be to meet the demand of our viewers. So without the supporters and readers of KidNewsMaker, we would not have been able to do this from the bottom of our heart I can only say thank you.”

Cover kid for the new edition is entrepreneur and author Lexi P., teen CEO of Curlanistas hair brand. It also has stories from homeschooled moms and exclusive highlights from the Raising A Mogul Summit in Atlanta, the American Youth Film Festival and the ExCEL Awards in D.C. Other stories highly kid authors, inventors, philanthropists and more. Categories: Business, Entertainment, Media Source: KidNewsMaker