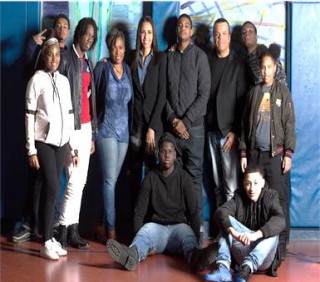 The film, which is scheduled for debut on April 2 at the Garden State Film Festival in Atlantic City, interviews adjudicated and at-risk Trenton city youth focusing on how they would solve current problems in their community such as building positive relationships with law enforcement and local government.

PEI Kids’ mission is dedicated to promoting and maintaining a safe environment for all children. The agency’s Juvenile Intervention Services programs work with first-and second-time juvenile offenders and youth at-risk of juvenile justice involvement, helping them change the trajectory of their lives. Executive Director Roz Dashiell explains, "I welcome opportunities that give our youth a platform to share their voice and tell their story. It is important that our young people have a seat at the table for these discussions because with their insight, we can start to consider the appropriate point of entry to bring healing around some of the issues that fracture our community."

Correspondent Adrienne Bankert said, "Working on this project was a gift. It was definitely a learning lesson for the youth, and for me. Some of the best moments were when cameras stopped rolling and we talked about their dreams for career and the future. At the end of the day we all just want to be heard and appreciated."

Seven13 films creates projects that provide positive messages and ignite discussions on social issues. “This project is important on several levels,” said Lee Kolinsky, co-owner of seven13 films. “It recognizes the challenges of youth who want to make a positive impact in their neighborhood, reveals the daily perception of their environments and seeks to offer insight on how the community can get involved.”

Seven13 films develops productions that actively include the involvement of those in the community who want to be a part of the filmmaking process. The company also plans to bring in local businesses and law enforcement agencies to help support an environment that strengthens bonds for a positive future. "The idea is to inspire young people to seek out the art of filmmaking by exposing them to the process right in their own back yard," said Joseph A. Halsey, co-owner of seven13 films. "We are hoping to bring the filming process into areas where film companies typically don’t operate."

About seven13 films
Seven13 films is made up of award-winning filmmakers Joseph A. Halsey and Lee Kolinsky. Seven13 films is dedicated to providing social messages that spark conversation through the art of filmmaking. With several years of experience in television and film, seven13 films offers comprehensive media strategies designed to drive education, awareness, community outreach and engagement on important public issues. To learn more about seven13 Films visit http://seven13films.nyc.