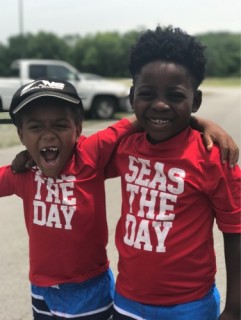 The two youngsters, 6-year old CJ and 7-year old Nick plan to use the channel to explore scientific theories and ideas, review products, and show young scientists at play.

In the first episode, Rocket Launch Reviews, the friends compare the contents of two different brands of rocket kits to explore Newton’s Third Law of Motion. They enthusiastically build their individual kits and hypothesize about which rocket will go higher.

CJ initially wanted to be a doctor but after deciding that he didn’t want to save “hundreds of lives, he wants to save millions of lives”, he now aspires to be a doctor and a biomedical engineer. He wants to heal people and create machines for use in the medical field that will help doctors do their work.

“I like science because I can use science to fix things and to heal people,” he said.

He likes, “mixing stuff and space”. Nick wants to be an astrophysicist (rather than a chemist) because he, “likes space a little bit more.” He wants to be part of the first human crew to go to Mars. “There are so many things you can do with science,” he says.

During the initial episode you can see a bit of competitiveness between the two boys as they discuss a part that is included in one kit but not the other. It is a healthy competition as they express youthful curiosity while comparing the contents of two products.

After their rocket launches the two can be seen playing like ordinary youngsters. They play together frequently and have established a friendship that will undoubtedly be lifelong making their channel engaging, entertaining and informative. Their moms added, “They are just kids that love science. They have already discussed buying houses next door to one another so they can continue their play dates.” Categories: Education, Entertainment, Science